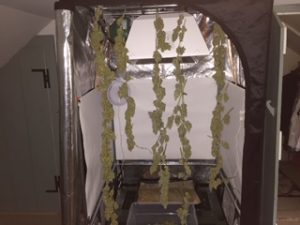 Last Friday a group of family and friends joined us for a working harvest celebration. Evan, Bill and I cut down my plants, placed the bud-laden stalks into bins for each of the three types I’d grown (Jack Herrer, OG Kush and Critical CBD), emptied the soil into my compost pile, and then passed out snippers to the team.

After 30 minutes or so we all agreed it was time to sample a little weed I had left over from my dispensary run, and some our cousins had generously brought with them to the party. Whatever we smoked made everyone intensely focused on trimming leaves off bud stalks. You could barely hear the old Coltrane I’d put on over the sound of furious snipping. When the food arrived, we took a much-needed break and dug into hot slices of pizza and popped open cans of IPA. What might have been run-of-the-mill pizza last week was amazingly tasty. Second and third (and fourth) slices were retrieved from the dining room. More cans of ice-cold local IPA were opened. The food break woke us out of our work trance, and the conversation started up again, with questions for Evan about the business, talk about positive experiences with CBD, and the usual comic stories of times when, like tonight, we’d consumed a little more than expected.

We had so much trimmed bud we decided to turn some of it into hash. Evan had bought some dry ice on the way down from Boston, and took us out to the patio to demonstrate how mixing it with chopped bud and then shaking it for 5-10 minutes releases resin that can be dried into hash. Turns out it was the witching hour for mosquitos who are drawn to CO2 (dry ice is frozen CO2), so after two rounds of hash-making, we were driven back inside to finish the final batch in the kitchen, bug free. 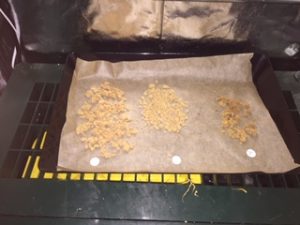 Bill and Evan strung up the trimmed bud stalks, along with the hash on a tray to dry in my grow tent. Looks like I’ll have the comforting whirr of the exhaust and circulation fans for another week in my office.

With the harvest work done, everyone left full and happy, and amazed by the idea that this was all completely legal! In a month, when everything has finished drying and curing, I’ll give each of them generous samples of the bud and hash they helped produce.